It took 29 years for Top Gun to find me. I had successfully avoided any exposure to the film- no scenes from the edited fit-for-tv version and no friends or film professors showing Top Gun ironically . Even the soundtrack hits that had been successfully added to my musical lexicon avoided being associated with Goose and Maverick. Take My Breath Away? Danger Zone? Who knew?

I picked up the copy in the Cambridge Public Library almost serendipitously. I turned the corner to the film section and it was the first title to grab my eye. It was calling me. Top Gun celebrates its 30th year anniversary next summer- what a perfect time to see what it is all about, reflect on what every one else thinks its all about, and regurgitate those ideas back out at you. Except I won’t. Unfortunately, Top Gun is nothing more than the ultimate vapid summer blockbuster that leaves you feeling incredibly neutral on all characters and pushes an audience to prescribe their own beliefs, emotions and psychological garbage onto the film.

There are several love stories happening throughout Top Gun, none of which take your breath away. Love for career, teammates and romantic partners all play a key role in moving the plot along. All three lack depth in character and development, therefore building a vacuous landscape for audience interpretation.

Every pilot attending the eight week training session at Top Gun is a dedicated professional who is passionate about flying. These are the most elite pilots in the US Navy sent for special training so there is no doubt that all of them want to fly, fly, fly. The need for speed is passed down through generations- Maverick’s father was a famous pilot who disappears in a mysterious accident. You get the sense that Maverick is only slightly haunted by this through scenes peppered into the movie including a conversation with love interest Charlie, and an admission by his teacher Viper on what happened during the dog fight that brought his father down. However, the revealed truth does not lead Maverick to change his reckless piloting ways. Maverick would have been a successful pilot whether or not he knew the truth about his father’s disappearance. All Maverick wants or knows how to do is fly.

Is every Top Gun student in love with one another? Hardly. Their relationship is based on team work, but the sparse conversations between the teammates are scraping the surface at best. Lots of high fives, sure, but does that strike a homosexual undertone? Again, hardly. The Iceman versus Maverick competition and sexual tension does not add up. From the first bar scene, Iceman is acknowledged as the best pilot in the group. Iceman and Maverick have conversations that point more towards developing a working relationship than direct competition. Maverick, and the audience, knows that his adventurous nature keeps him in the number two position. Iceman always plays by the rules and wins favor with the instructors. But here I am, prescribing what I believe to be the case, as has every other audience member.

The romantic relationship between Charlie and Maverick comes as a complete afterthought. Maverick must have a win in the end, so the girl fits perfectly into the blockbuster equation. No thought to the story here, just a standard “boy-meets-girl, wine and dine, argue and boom!” sexual montage. I’m tired of writing about how bored I am watching this boring, shallow movie.

It is possible that 29 years is too long to wait to visit a “classic.” The character development is weak at best, every set feels stale and the relationships among the characters are as shallow as Tom Cruise in real life. The redeeming piece of Top Gun is the amazing time-capsule containment of what was then the dying art of dog fighting. It preserves the cold world, mysterious enemy on the other side of the globe mind view that rocked the United States during the 80’s. It was easy for Tony Scott to do- provide almost no information about an enemy to the audience and voila. Is this impressive, top secret work here or just lazy writing? Then again, the filmmakers left us with a blank slate to play with, so who am I to judge.

If you haven’t seen Top Gun yet, don’t worry; you aren’t missing much. 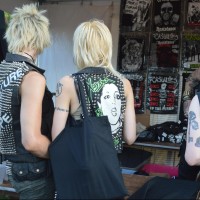 Philadelphia native living in Cambridge. Dogless dog lover. Prefers to hide out at the Coolidge Theater outside of work.