Everybody’s got different things that come to mind when you mention 80s’ movies. Bad haircuts and wardrobes, cheap effects and gimmicks, gross slimy monsters, you get the picture. One of my favorite personal artifacts of 80s’ movie history however, are all of the cheap cash-in movie ripoffs: Mac and Me, Nukie, endless Rambo ripoffs, anything movie studios threw together to get in on the latest craze. So when I saw the cover art of Ghost Chase, with it’s cheap looking E.T. and Yoda mashup puppet, I had to grab it and check it out.

I went into Ghost Chase with some high expectations. Not necessarily expectations that I’d see something great, but mostly that I’d see something weird. I got what I was looking for, but not really the way that I’d wanted. Looking at the cover, I recognized Jason Lively and Jill Whitlow from Night Of The Creeps, so I was hoping this would be something similar. Maybe a horror-comedy that fell off the map, or some unknown sci-fi adventure film. I’m pretty unfamiliar with Roland Emmerich’s work outside of Independence Day, so I wasn’t really sure what to expect. In all honesty, I can’t even tell you what this is, even after watching it.

For the first twenty minutes or so, it seems like it could be a pretty fun ride, but that feeling fades pretty quickly. Nothing really happens, aside from silly jokes and kids goofing off. So much of the dialogue is taken up by sarcastic jokes and stupid reactions, I can barely make a clear picture of what actually is going on in the story. The main plot of the movie is as basic as can be, but it’s told so poorly that it’s tough to make out if anything interesting actually happens. Everyone’s a kid who looks like they’re either eight or sixteen years old, but somehow all live on their own. One of them somehow owns a film studio, or is starting one, or is related to someone who had a studio at some point. There’s a ghost, who may also be a monster, who is an old butler as well, I think. I’m not sure if he was always a monster, or if he’s a deformed old man, or if he was always a ghost. Any details that would help anyone understand are skipped in favor of bad jokes and silly reactions. I’m not sure if I completely missed something, or if was so badly written that it just doesn’t make sense. There’s really nothing about Ghost Chase that isn’t confusing, and it’s frustrating me to no end that I can’t figure out this stupid kid’s movie.

My main issue is that it really doesn’t seem like anyone involved knew what kind of movie they wanted to make. The tone of the movie makes no sense, mostly thanks to the soundtrack that sounds like reject cuts from the Bachelor Party soundtrack. The vibe that I got from Ghost Chase was that they were trying to make either an homage movie, or trying to make another buddy alien movie while it was hot. There’s lots of references to old movies, either in conversation or set decorations, so it seems like an attempt to pay tribute to horror and old Hollywood was made, but fell short. After doing a bit of research I found out that this was almost entirely a German production, so I’m curious if that led to any difficulty in trying to make a movie that appeals to American kids and teenagers. Outside of the US, the movie was released as Hollywood Monster, which fits the story a little better, and really makes me wonder where the Ghost Chase title even came from.

The dialogue definitely has the feel of what an out of touch adult might think kids talk like, especially someone who might not know US culture very well. None of it seems natural and all of the characters are pretty one dimensional. It doesn’t even seem like the characters care much about what’s happening around them. We start out with a team of two filmmakers trying to make a movie and almost immediately one of them entirely loses interest in the production. If we’re to believe this is a tribute to 80s’ adventure and ghost movies, it doesn’t really make sense for the film team in the story to have no passion for their own project. If the story focused more on the characters actually trying to make a movie, and less on them trying to score girls in roles for a movie, it would have been a lot more entertaining. The climax of the movie that takes place in a haunted mansion actually is pretty cool visually, but it’s so late in the film that it’s hard to care. It just serves as a disappointment because it’s the only segment of the movie that has any charm, and there’s only a few minutes of any actual adventure or suspense in the film. I have to imagine a bit of that was due to budgetary constraints, since it looks like a big chunk of the film’s money was a grant given to the director/writer from a German film school.

Here’s the part that I was most excited about but left me disappointed: The monster, “Louis”. As far as movie monsters go, he may actually be the worst. His design is obviously very inspired by E.T. and Yoda, but even though the puppet looks decent, it’s got no personality. Imagine a mix between those two, and add in the worst of Splinter from the early Ninja Turtles movies. He’s not scary, he’s not smart, he’s not funny. Most of all he’s just boring and annoying. He doesn’t have any real backstory in the movie either, so I’m not really sure why he was there at all. He’s such a forgettable part of the story that his voice actor doesn’t even get a credit. If they dropped him entirely it would have been a much better movie.

All in all, Ghost Chase was a bit of a bummer because everything I hoped for wasn’t there. It’s not the first time that the cover and poster art are way better than the actual movie, but it is the first time I saw a monster movie where I wish the monster didn’t play a part. 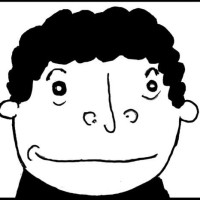 Alejandro is a Cleveland transplant from Philly who's working hard to watch as many movies as he can until he goes insane. He's an obsessive collector of records, movies, comics, books, toys and way too much other stuff he doesn't need. Alejandro got into the stranger side of cinema from obsessing over movie samples in punk and hardcore songs and sci fi and monster photos in album art. Aside from movies he likes drinking too much coffee and root beer, playing pinball and hanging out with his dogs.