We have a saying around here in the Tomb, ‘If you care about something, you care enough to do it twice!” and that is true for this episode of TOMB OF IDEAS, which we cared enough to record it twice. (All that talk of lost audio just what is a ghoul even more loathsome than myself would call “FAKE NEWS!”)

and Jack Russell takes part in the LAMEST GAME in

Three torrid tales that’ll surely make you glad we tore this episode from the jaundiced jaws of extinction. 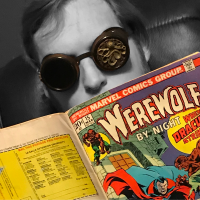