What scares you? What’s the most frightened you’ve ever been?

When I was little, natural history museums frightened the hell out of me. The stillness, the unreality of the place… it felt like my group and I had stepped into a parallel universe, and a part of me feared I would never make it home. I don’t know why I thought this, aside from the prospect that I have just always been this anxious, existential mess.

It’s October 4, 2016. Fifty-one days ago, I wrapped principal photography on my first feature film. Thirty-five days ago, my girlfriend dumped me. I had spent the following month completely numb, but today I felt something: I wanted to watch a movie. I went to the public library in Covington, KY, and looked at their horror section, because ’tis the season. And I smiled, because there amidst the monsters and mayhem sat an outlier: Akira Kurosawa’s Ikiru.

For those unfamiliar, this is the story of Ikiru: Mr. Watanabe (Takashi Shimura) is a bureaucrat, and when we meet him he is about to learn he has stomach cancer. A fellow patient tells him that if the doctor says he can eat whatever he wants, it means he has less than a year to live. That happens. Mr. Watanabe rages at the dying of the light not because death is unjust, but rather because the stark inevitability has removed the choice of continuing to lead an unexamined life. He has a son, from whom he is estranged. He has an office that depends more on his presence than his person. He has reasons to not reflect, is what I’m saying.

There is an old George Carlin routine where he says, “Everyone else’s stuff is shit, but my shit is stuff.” Ikiru is perhaps the greatest example of a similar, paraphrased philosophy: Everyone else’s reasons are rationalizations, but my rationalizations are reasons. This is made explicit in the second half, where colleagues and relatives have gathered to mourn his death, toast his memory, and try to make sense of why he spent his final days working to convert a random wasteland into a children’s park. It would be so easy for them to understand his actions, if they could only look at themselves and determine why they had not done the same. One can easily picture a younger Mr. Watanabe having this conversation at the funeral of the man whose office he would one day take over. And yet he is compelled to reflect, and in doing so finds a purpose, and a legacy. Is cancer still a curse if it can drive a man to finally live?

Most would consider this a drama, but I can see how it would horrify someone with their own third-rail topics or regrets they’d rather fake their own death and start over than confront, and who has no idea what they’re sitting down to watch. The thing about horror is, like so many other things, that it’s subjective. Whatever scares you, that’s what scares you. It doesn’t have to make sense to others. I mean… museums!

The annals of horror are rife with parents living in fear of the person their darling child is growing up to be, most notably The Exorcist, The Omen, and I would argue for the inclusion of We Need To Talk About Kevin. Ghosts, vampires, werewolves – we all know them shits ain’t real! But they scare us and they scar us because they represent something that is real. We invented horror for the same reason we invented religion, to put a face to that which we don’t or can’t explain. Which brings me to another thing we invented so as to better navigate this crazy world: Marriage!

It’s July 24, 2017. I’ve been back in KY for about six months, after a month-and-a-half spent in NYC. I had been feeling an urgent need to get away from Cincinnati and KY, and a friend let me stay at her place while she was visiting family back in Europe over the holidays. That trip convinced me that I needed to live in NYC, and in a month I would be. But for now, it’s July and I’m in KY, and I need something to watch. So I went back to the library in Covington, and what do I find sitting in the horror section but one of my favorite movies of all time: Who’s Afraid of Virginia Woolf?

Honestly, I feel far less compelled to explain why someone would be horrified by this one. Have you seen it? Then you know. Have you not seen it? Well, you should fix that.

Richard Burton and Elizabeth Taylor play a couple who have been married forever. George Segal and Sandy Dennis play a couple who have been married only a short while. The two men are professors, and the four meet at a cocktail reception for faculty. The latter two accept a (drunken) invitation to join the former two back at their home. They do this because they are still young and brimming with optimism about people, relationships, and social structures in general. Burton and Taylor — a couple in real life as well, which I don’t find as relevant as others seem to, but that’s another article — have been inflicting themselves on each other for longer than either would care to admit, and they both jump at the chance to perform their show for an audience; especially an audience on whom they can turn their weapons eventually. (I mean figurative and verbal weapons, of course, though a shotgun is brandished at one point.)

They are the threat of what we might become, but also the promise. Once you get past the shock of what they are saying to each other, you see that at least they are still talking to each other. It has been untold decades since their first date, but still they burn to be together. The speed of progress is eclipsed only by the speed of acclimation, and it is one of those universal truths that a good and healthy relationship will be taken for granted. If you are lucky enough to find someone with whom you want to share your life, and they in turn want to share their life with you, then you are on a path to moments in which you wish with every fiber of your being that the person you love more than anything in this world would just disappear. Being a person is difficult not because we contain multitudes, but because we are those multitudes at all times. As Chris Rock said, “You haven’t really loved someone until you’ve stood in front of a mirror and practiced your alibi.”

So yeah, person who put Who’s Afraid of Virginia Woolf? in the horror section, I get it.

I will now tell you about the movie that scared me the most in my life. Since you’re a Cinepunx reader, I’m going to assume you’re familiar with The Texas Chainsaw Massacre and spare you the recap. The Texas Chainsaw Massacre is obviously a heavyweight in the genre, and its influence can be felt far and wide – and not just in horror. Summer School is a 1987 comedy starring Mark Harmon as a high school teacher who gets stuck teaching summer school. He doesn’t want to be there, the kids don’t want to be there, hijinks are sure to ensue! Two of the kids in his class are devout acolytes of the gospel of The Texas Chainsaw Massacre, referencing it constantly and even screening it for the class. Then, one day, the school board figures out they shouldn’t have assigned the “cool teacher” to summer school, and they replace Mark Harmon with a Dolores Umbridge-type who has no time for the nonsense of bored teenagers. But these bored teenagers liked having a teacher who understood them, so they make a stand against the board to bring back their beloved Mark Harmon. How do they make said stand? By staging The Texas Chainsaw Massacre in their classroom, of course!

All of a sudden, this light, breezy comedy has severed heads and bloody bodies going every which way. Now, I do not have a robust supply of chill to begin with. Dear Reader, I assure you, eight-year-old Adam lost every bit of chill he had. I had to be removed from the theater because I was crying and wailing. I think I eventually cried myself to sleep, because I don’t remember calming down.

I’m pretty sure I’m the only person to ever flee a screening of Summer School in tears, but I don’t think I’m alone in fearing unreality making unwelcome and unplanned intrusions on reality. I may not understand why someone is afraid of ghosts or Frankenstein’s monster or going outside, but I don’t have to understand. It is not the objects of our fear, but the fear itself which unites us, which pulls us into a darkened room with the promise of catharsis and deliverance. So maybe next time I’m at a library in KY, I’ll drop Summer School in the horror section, in the hope that it makes someone else smile and feel a little less alone that day. 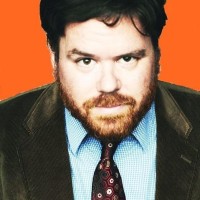 Adam directs audio books, hosts a podcast called "Speaking in a Silent Room," and made a movie called 'A Ghost Waits.' He used to write for and edit Creative Screenwriting Magazine. He lives in Queens and should probably sleep more.

From the Stereo to Your Screen: “You Could Be Mine” by Guns ‘n’ Roses from Terminator 2: Judgment Day

BOOKSHELF: The Disturbing Pulp of Echoes of a Natural World