(Note: Zombie Flesh Eaters is known by a ton of titles around the world, including: Sanguella, The Island of the Living Dead, Zombie The Dead Walk Among Us, Gli Ultimi Zombi, Woodoo, L’Enfer de Zombies, Zombie 2: The Dead Are Among Us, and Nightmare Island. In the USA it seems to be known mostly as Zombie.)

While Australia is not terribly censorious with movies (video games are another matter entirely), the government did take a few cues from the UK during the era of the “Video Nasties.” Numerous films were banned throughout the 80s and 90s, or released in heavily cut form. But in the mid-aughts, restrictions loosened considerably, with films like I Spit On Your Grave, Texas Chainsaw Massacre 2, Cannibal Holocaust and The Last House on the Left receiving high-profile home media releases.

In the wake of their release, other local distributors realised there was money to be made. Tons of other grindhouse films that had either been previously banned or simply never seen wide release over here were suddenly unleashed on Australian shelves. Cheap and cheerful was the motto, highlighting gory delights in garish fonts. And that’s how I first encountered Zombie Flesh Eaters.

In the 70s, Italian copyright law took a fairly liberal view about original works being promoted as sequels to other films. George A. Romero’s Day of the Dead was originally released in Italy as Zombi, and so Lucio Fulci set about creating Zombi 2, which would hit cinemas a year later. The marketing built into the title gave it a boost, and it promptly went on to be hailed as a cult classic and banned in equal measure around the world.

The premise is simple enough: a group of people travel to a remote tropical island, seeking a missing father. In a shocking twist, it turns out that the island is covered in zombies!

We don’t get a lot more information than that throughout the course of the film. The exact origin of the undead is never made quite clear. It’s suggested some kind of voodoo is at work, though we never actually meet any perpetrators to back that up. Token “rational” character Doctor Menard (Richard Johnson) strives for a natural explanation, but as is often the case in these films, science simply can’t keep up with the need for a body count. One by one the primary characters (including the good Doctor himself) are picked off in gruesome fashion, leading to an inevitable showdown between the handful of survivors and the zombie horde.

Even in 1979, this was a pretty clichéd take on zombie films, but it’s carried off with such style and panache that you won’t really mind. In spite of the obviously low budget and poor dubbing, the film is very well-shot, and they didn’t skimp on the special effects. Though the zombies look much tamer in a post-Walking Dead world, they are streets ahead of the blue-faced ghouls seen in Dawn of the Dead. Of particular note is the worm-eyed conquistador zombie, who in spite of his minimal screentime is still one of my favourite cinematic monsters.

A special mention must also go to the soundtrack by frequent Fulci collaborator, Fabio Frizzi. As soon as I first heard the opening notes of the main theme, I knew that I was in for something special. Recorded in an era before synth became synonymous with sterile, it has the capacity to unsettle me whenever I hear it to this day. Yet it’s an oddly fond sound too, conjuring up memories of past-midnight viewings of cult trash with friends.

There are two scenes people always talk about when they mention Zombie Flesh Eaters, and I would be remiss if I didn’t touch on both of them. The first is the “skewered eyeball” scene. Arguably the most iconic scene in the film, poor Paola (Olga Karlatos) seeks shelter from the zombies in her house, only to have them break in and impale her eye on a particularly vicious splinter. It’s shot in excruciatingly slow detail, with Fabio Frizzi’s score sounding particularly nightmarish as the whole event drags on. There is a certain ugly nihilism in the scene, which helps distinguish it from plenty of other zombie films. Not to mention that later on in the film, some of the other characters find her remains, and…well, it ain’t pretty.

The second is the “zombie vs shark” scene. What initially appears to be an elaborately staged underwater scene to showcase Auretta Gay nude rapidly takes a turn for the surreal, when a shark and zombie turn up on the floor of the ocean, and promptly do battle with one another. It’s totally ridiculous, but kudos must go to everyone involved for actually pulling it off. Even now it looks wild, and I can only imagine how many best practice rules and regulations were ignored in order to get the shot.

Those scenes are worth the price of admission alone, though there’s plenty of other moments to enjoy throughout. While not as good as The Beyond, Zombie Flesh Eaters is well worth a watch for zombie aficionados, and is certainly the more accessible of the two films. There are plenty of campy moments to laugh at if you’re in the mood, but the atmosphere, special effects and feeling of impending doom still manage to disconcert almost 40 years after it was first released. It’s an excellent introduction to the more grindhouse side of horror. 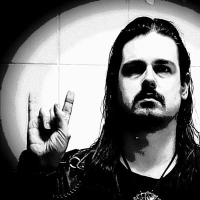 Tom G. Wolf is a Sydney-based author who specialises in pulp-style horror and adventure fiction. By day he works as a journalist and copywriter. His work has appeared at We Are the Mutants and Astral Noize. He lives in Sydney with his wife and cat. You can find him on Twitter @lupinebookclub. His horror novella, Lost Tunnels, can be purchased here. https://www.amazon.com/Lost-Tunnels-Tom-G-Wolf-ebook/dp/B07DWC2M78