As long as there have been movies, there have been horror movies. The genre is one of the pillars on which the entire medium rests. And yet, it has its skeptics. When I was young and ferociously wrong about much of the absolute certainty with which I viewed the world, I largely dismissed horror movies as a tacky byproduct of industry cynicism, i.e. easy to crank out on the cheap and then sit back and watch the profits roll in. This was because I’d never been truly shaken to my core by a horror movie, and didn’t think it was possible. Again, I was wrong. The movie that changed everything sometimes makes people frown and ask “really?” because it’s not one that makes “scariest movies of all time” lists all that often. There is a story, which I will proceed to tell. This is how Event Horizon (“really?”) kept me awake for a week:

In the summer of 1997 I was accepted into an apprentice program for young theater artists, where we would learn our craft from and alongside industry professionals. I was there as a playwright, even though I’d never written a fully realized play, and was a bit out of my depth in terms of the networking side of things, so I focused on my strengths, which at the age of eighteen were doing enormous handfuls of drugs and trying to have sex with anything not bolted down. Those adventures were fun but largely irrelevant to my coming around on horror movies, so to make a long and lurid story short, one evening an acquaintance of mine bought a five-strip of acid that I, legitimately worried that tripping would be dangerous for her, ended up eating almost all of myself. The ensuing evening was extremely dramatic—and, in a further effort to keep a long and lurid story shorter and less lurid, one that thankfully had no long-term negative effects on anyone beyond a handful of minor short-term scandals—but one that ended with a more or less safe landing back on Earth.

A couple weeks after the program ended and I returned home with some good stories and practical experience making theater, I went to the movies, more to go to the movies than to see anything in particular, and as fate would have it Event Horizon opened that weekend and I hadn’t read any reviews yet. As I took my seat, and the lights went down, and the movie began, I was gripped with the sudden feeling that something was “off.” I couldn’t pinpoint what that thing was. I just knew that it felt as though I’d shifted into a state like reality but not. (My best guess, not to skip ahead, was that I was having an acid flashback, although some maintain that acid flashbacks aren’t real, so who knows, really.)

For the next hour and a half, I watched the movie vaguely convinced that its director—who I would later learn was the celebrated Paul W.S. Anderson—was a being from, or possessing access to, a realm beyond this one. The story, in brief, concerns a salvage mission doubling as an investigation into what exactly happened to an experimental ship called the Event Horizon that suddenly reappeared in orbit around Neptune after being lost. It turns out that the experimental nature of the ship involved its ability to traverse dimensions, and that in its travels it brought . . . something . . . back. Although normally I thought of myself as someone easily able to tell fiction from reality, and as someone who had learned to do so in early childhood, I nevertheless became convinced that Anderson and screenwriter Philip Eisner had somehow accessed the dimensional terror depicted in the movie, and were subtly introducing it into our world for some nefarious purpose. There’s a scene in the movie where the protagonists finally unscramble an audio recording they had believed said “Liberatis me,” or “Save me” in Latin, only to discover that the full recording, accompanying horrific video footage of the Event Horizon‘s crew tearing each other limb from limb, says “Liberatis tutumet ex infera,” or “Save yourselves from hell.” That was when that uneasiness peaked and I felt I was glimpsing beyond the comforts of “normal” reality into something else, and for a brief moment was more purely and sharply terrified than I ever had been in my life. Then the moment passed, and I felt vaguely silly, although still disturbed and mildly paranoid.

When the movie ended, so did the mood. I walked home, not sure if I thought it was good, although I conceded that Anderson had skillfully created a mood. By the time I got home I had progressed sufficiently beyond the earlier fright that I was fretting over the perilous financial state of Laurence Fishburne’s career. Wholly back to normal. So much so that I remember very few details of the remainder of the day, only going to bed and turning out the light. And then being awakened by a voice in the darkness whispering “Liberatis tutumet ex infera.”

I woke up with a scream that I tried to turn into a normal shout, resulting in a very odd and unconvincing sound. One loud enough, me being home for the remainder of the summer, to wake my mom. She tersely asked what the fuck the fucking noise was all about, and was not pleased at the explanation. She told me to go back to sleep. I tried. I tried for the next several days, to no avail. Every time I would close my eyes, “Liberatis tutumet ex infera.” By the third day I was hearing it faintly in broad daylight.

By that point I was barely functional. I was swaying while sitting still, unable to stand fully upright, unable to do anything other than read or listen to music, so I listened to only the brightest and most pleasant music, read only the lightest and most entertaining books. Eventually, after retreating into this inner solarium and losing all sense of time, I closed my eyes and slept, dreamless, for an entire day. The next day I had the same feeling I always have after a migraine, as though there’s a physical hole in my brain, mildly giddy but unable to focus on anything for too long. The day after that, all systems normal.

Shortly after returning to college for my sophomore year I got into a conversation about my Event Horizon experience and was met with derision: “Really?” “Dude, you talk all that obnoxious ‘Horror movies suck/I only like Dario Argento movies for the aesthetics’ nonsense and then fuckin Event Horizon scares the shit out of you?” “Event Horizon? Really?”

One friend of mine with a practical streak suggested that we rent Event Horizon on VHS about a year later—I’d told the story of how it freaked me out multiple times at that point—to confront the fear head on and thus conquer it. So, over some beers, we watched the movie and it was, for lack of a better term, ordinary. There was no channeling a terror from beyond the infinite. The spoken Latin was not an incantation. Sam Neill was simply Sam Neill. (And God bless us all for that.) Event Horizon was but a solidly made genre picture by an idiosyncratic director who would go on to, deservedly, accrue a cult following.

There’s no dramatic climax to this story, and I like it better that way. I developed a more cautious attitude toward psychedelic drugs. While I inevitably feel like a guest in someone else’s house when watching horror movies, I’ve developed a respectful esteem for the genre. I think it can enrich the mind and the spirit to have the living shit scared out of you every so often. And, if horror movies can get to me, they can get to anyone. Long live horror. 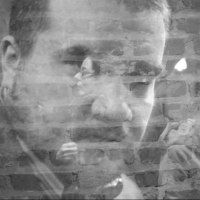 Danny Bowes is a theater artist, filmmaker, and critic whose writing has appeared in Premiere, The Atlantic, The AV Club, RogerEbert.com, Salt Lake City Weekly, and the Village Voice.

WEIRD LIKE US: Five Comics for Fan’s of FX’s LEGION