My peers in show choir introduced me to the world of classic horror films. It was my first year in show choir and for the week of Halloween, we would go to a different members house and watch two horror flicks. It was that week in 2001, that I was introduced to The Ice Cream Man, IT, Halloween, Evil Dead and the Texas Chain Saw Massacre. I savored each one and had a few nightmares. I loved how horror films created their own worlds full of monsters, killers, and masked maniacs.

It took me several years though to realize how enmeshed politics was in the horror genre. It was not until I attended Salem Horror Fest in 2017. I was already traveling to Salem to explore its spooky and morbid history, and while on the train, I found out about the horror film fest. The night I arrived I bought tickets to see Texas Chain Saw Massacre.

That year Salem Horror Fest wrote a short political summary of each film they showed. For the Texas Chain Saw Massacre, they wrote: “What you are about to see is true. Who’s to say, really? First released while America was struggling with the realities of an oil embargo, the impeachment of a president, and what seemed like endless war, the Texas Chainsaw Massacre is a direct response to the horrors of its time.”

In the mid-’70s, the US was on the brink of social turmoil, grieving for the thousands of lives lost in the Vietnam War, while the rest were trying to build a future against the backdrop of economic crisis and mass unemployment. Texas Chain Saw Massacre situated itself in this time and becomes a cultural and political film for the working class. The film screams at the evils of capitalism, societal neglect of the working class, gender politics, corrupt politicians, and commends a vegetarian lifestyle.

In the first act, we are introduced to a group of five middle-class young people, Sally, Franklin, Kirk, Jerry, and Pam, who travel to see if Sally and Franklin’s grandfather had been dug up from the graveyard since it was hit by grave robbers. After they leave the cemetery, they pick up a young wandering hitchhiker, who becomes a danger to Franklin, so they leave him by the side of the road. In the second act, the van is low on gas, and the gas station won’t be receiving any until later that day or the next day at the latest (this is a consequence of the oil crisis). So, to kill some time, they go to Franklin and Sally’s relatives’ abandoned house and stumble upon the Sawyer Family’s home, which resides Leatherface, The Hitchhiker, The Cook, and Grandpa Sawyer. As the young people explore the Sawyer house, Leatherface tortures and kills them off one by one. The third act begins with a sit-down meal full of cooked human meat and the final girl, Sally, as the guest of honor. They slowly torture her, but she escapes through a window and eventually ends up in a truck bed that drives her away. A frustrated Leatherface twirls around with his chainsaw basking in the sunrise.

After the opening lines of the film, in which the plot is fully summarized, macabre images of rotting de-graved bodies fill the screen. We then hear a news anchor inform us about Nixon’s Watergate indictment. The film pulls us into the political chaos of the time. The radio is featured throughout the film to highlight other horrific events alongside the fictitious events in Muerto County, which is not a real county in Texas and means dead in Spanish.

After they leave the graveyard, Franklin delightfully speaks about the old slaughterhouse that they pass, where his grandfather sold his cattle to. He is specifically interested in how they used to kill the cattle and skin them to be sold. We find out that the workers had been laid off from the factory, which included the Sawyer Family. Carol Clover, in Men, Women, and Chain Saws, writes, “Three generations of slaughterhouse workers, once proud of their craft but now displaced by machines, have taken up killing and cannibalism” (24). Leatherface used the skills he learned at the slaughterhouse to kill and butcher humans. The Sawyer Family, an underemployed working-class family, literally feeds on the rich. Their outsourced jobs have forced them to find other means of survival.

In the realm of gender politics, Leatherface dons three masks. He wears a more masculine mask when he kills the four young people. He changes his face into a stereotypically older woman’s face with gray hair and a made-up face to prepare dinner. And when they sat down to eat, he changed it to another female mask with dark hair. Gunner Hansen, who played Leatherface, in an interview said, “in effect, Leatherface is saying, “Well we need a woman around the house now because he’s obviously taken on the role of the housekeeper. He’s been in the kitchen making dinner so he’s taking on the mother role” (Jaworzyn, 2003, 41). To keep the traditional heteronromative lifestyle, the Sawyer family needs to have at least one woman to be the mother figure. Although Leatherface sports a tie and includes a suit jacket at dinner, it’s his mask that represents his age and gender. This becomes more apparent in later films, such as Texas Chainsaw Massacre: The Next Generation.

In the final act, the Sawyer family sits down for a cannibalistic feast. Naomi Merritt, in her fantastic article, wrote that the family’s “values and organization reflect, or correspond to, established and interdependent American institutions (the nuclear family, the worker, the capitalist system), but their embodiment of these social units is perverted and transgressive” (207). In the shifting cultural sands of the ’60s and ’70s in the US, what was considered normal was being questioned. Authority figures were no longer trustworthy if they ever were. Sit down meals with your nuclear family were slowly fading since most of the family had to join the workforce in order to survive. The Sawyer Family attempts to keep the nuclear family alive the best they can with a sit-down meal and even though Sally is passed out for most of it, they have her sit at the head of the table. The family continues in their traditional ways, even when they dine on human meat!

Texas Chain Saw Massacre is a politically complex film. It speaks to the changing nature of authority in the US, that no one should be trusted, not your neighbors, not even the President. Leatherface keeps working-class heteronormativity by changing his mask according to what labor he was participating in and using his slaughterhouse skills for human meat rather than cow meat. And the Sawyer family dines together on the meat of the rich. Texas Chain Saw Massacre not only describes the political and cultural situation in the ’70s but helps us understand our current dilemmas.

Naomi Merritt, “Cannibalistic Capitalism and other American Delicacies: A Bataillean Taste of The Texas Chain Saw Massacre,” Journal of Film-Philosophy 14.1, 2010 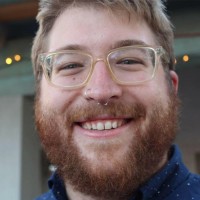 Timothy is a pastor and lives in Philadelphia, PA. He watches horror year-round and enjoys presenting on pop cultural topics pertaining to horror at the annual Mid-Atlantic Pop and American Culture Conference.

Big Eyes’ Kait Eldridge On the Band’s Ever-Evolving Sound and Their New LP, STREETS OF THE LOST