on October 29, 2020 Jake Given
ShareTrx_addons_twitterFacebookGoogle+Trx_addons_tumblrE-mail

For many, Aleister Crowley is little more than a satanist. He was known in his own time as “the wickedest man in the world,” and even identified himself as “the beast, 666.” However, it’s important to recognize that Crowley’s own words were often ironic and dramatic, and that Crowley was not, in any strict sense, a satanist or “devil-worshipper.” He was, however, one of the most important occultists in recent history. He even developed his own magickal religion called Thelema, the Greek word for “will,” which contains one of the most misunderstood maxims of all time—“do what thou wilt shall be the whole of the law.” Crowley’s research and experimentation into magick continues to inspire spiritual seekers and to provoke religious traditionalists to this day.

As a student of religious studies, I have an interest in Crowley’s historical significance. But as a paranormal podcaster, I find Crowley’s connection to the history of ufology downright fascinating. In fact, the connections between magick and UFO phenomena have a long history. The modern connection between UFOs and the occult began in 1917-1918, when Aleister Crowley performed a ritual called the “Amalantrah working” in a NYC apartment. This ritual supposedly opened a portal for extra-dimensional entities to visit our world. The being that came through looks eerily similar to the classic “grey” alien. This entity is known in occult circles as “Lam,” pictured below.

Lam has a long history in occult circles and ufogical circles alike. Kenneth Grant has formalized magickal work dealing with Lam in the Typhonian order, an offshoot of Crowley’s original Ordo Templi Orientalis. Additionally, Allen Greenfield, a former practitioner of Thelema, has written about the intersection of ritual magick and UFO phenomena in The Secret Cipher of the UFOnauts. Greenfield too, has been involved in the paranormal documentary series HELLIER, which tracks an investigation into cryptids and extraterrestrials that quickly turns toward the occult, featuring a Thelemic cipher that corresponds to information in Crowley’s Book of the Law.

Ufology asks about the nature and origin of unidentified flying objects, and, sometimes, of their pilots. In ufology, the extraterrestrial hypothesis, perhaps the most widely known theory, holds that UFOs are piloted by intelligent extraterrestrial creatures, (i.e. aliens) or that they are unpiloted drones from other planets sent to research Earth and its inhabitants. One could argue that H.G. Wells primed the imagination of the English-speaking world to accept this hypothesis in his War of the Worlds, (1898) a story about an alien invasion that preceded the 1947 American flying saucer wave by almost half a century. In contrast to the extraterrestrial hypothesis, the psychosocial hypothesis holds that psychological or social factors contribute to UFO phenomena. The merits of this theory are on full display in an episode of HELLIER,  in which a UFO abduction experience is induced through hypnosis. Fans of the show can even buy a “self-induction hypnosis kit” that includes a “20-minute self-hypnosis abduction session by hypnosis instructor and occultist, Lonnie Scott,” (though it appears to be sold out). For the psychosocial hypothesis, UFO abduction experience is just as much about what is “in your head” as it is about flying saucers from outer space.

A third and perhaps more interesting theory is the interdimensional hypothesis. The interdimensional hypothesis holds that UFOs and their pilots manifest themselves from realities that exist alongside our own. They are not, then, traveling from a physical location lightyears away, necessarily. Rather, they could be existing alongside us in alternate dimensions, slipping in and out of our reality.

John Keel remarks on the earthly and ancient quality of UFO phenomena in his book, The Mothman Prophecies. He writes,

That unidentified flying objects have been present since the dawn of man [sic] is an undeniable fact. They are not only described repeatedly in the Bible… When you review the ancient references you are obliged to conclude that the presence of these objects and beings is a normal condition for this planet… They are not from outer space. There is no need for them to be. They have always been here.

For Keel, these phenomena are as ancient as our species. One only needs to look to the first chapter of Ezekiel in the Bible to see an example of an ancient UFO. Importantly, though, for the ancients, these phenomena weren’t unidentified. They were perfectly explainable by appealing to divine messengers, angels, and other manifestations of heavenly power.

This brings us back to Crowley and the connection between magick and ufology. Many of Crowley’s workings drew from the “Golden Dawn” tradition, which emphasized the importance of establishing contact with one’s “Holy Guardian Angel.” In fact, Crowley began (but famously didn’t complete) the “Abramelin Operation,” which was first described in grimoires dating back to the 17th century and introduced to English-speaking occultists in the late 19th century by Samuel MacGregor Mathers. The ritual is designed to give the operator contact with their holy guardian angel, as well as the ability to bind the forces of hell. Angelology (the study of angels) was central to the Golden Dawn and to its inheritors like Crowley. To put it another way, Crowley’s magickal interests were irreducibly angelological. And, as Keel suggests, angels and UFOs have been tied up together for a long, long time. It shouldn’t be surprising, then, that Crowley’s occult experimentation would lead to theorizing about interdimensional entities in a way that would dovetail with modern ufological research.

I’m not suggesting that any of this is true or false, per se. I’m publicly agnostic about it (though I enjoy entertaining various theories privately). What I want to draw attention to is the angelological function of the UFO. What appears at first to be a strange juxtaposition of fantasy and science fiction may in fact be the latest iteration of angelology. Our age largely meets angelological discourse with a yawn at best. But, without affirming or denying their existence, we can say that phenomena attributed to angels have been recorded throughout human history. When we no longer believe, then to whom do we attribute such phenomena? When an incredulous modernity all but strips the cosmos of its angelic and demonic hosts, is it any wonder that they begin to resurface in a form acceptable to moderns? Namely, in a technological form? Might it be that UFOs stand as modernity’s technological angels? 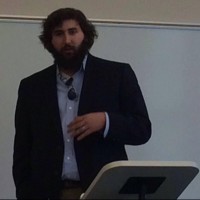 Jake writes about film, culture, and weirdness and cohosts the Weird, Obscure, and Possibly Unsafe podcast on Cinepunx.