Who doesn’t remember a time when they just hit puberty and relished in the “trick” half of trick or treating? Or is it only me? Growing up in Allentown, Pennsylvania in the 1980s definitely had its share of the usual nonsense: soaping car windows, T.P.ing trees and tick-tacking (throwing corn) people’s front porches.

My friends and I took it to the next level. My buddy “Cabbage Head” and I used to go raiding. Instead of throwing handfuls of corn at porches, we’d put the corn in sandwich baggies and twist them into bombs and throw them at people’s back doors. I’d be lying if I said we didn’t break a few windows like that, but for the most part the bags broke and it was more a mess to clean up than replace a window. Sometimes we threw poppers (little paper-wrapped gun powder) at cars or just laid them in the street, so you’d think you got a flat.

My other buddy Darrell and I once attempted to go egging, but karma bit me in the ass and my eggs broke in my jacket pocket before even hitting one house. Most of the time, though, we were handing out candy. Sometimes we played tricks on the kids, like replacing gum with already been chewed gum or we chewed the gum and wrapped stones and handed those out. Or when the kids said, “trick or treat,” we asked which one they wanted, and only a few bright kids understood. We had them spinning around and standing on one foot or jumping for the big payoff of one piece of candy. If the next kid said treat, they got a handful. Sometimes, that kid would brag it up to other kids that we were giving out handfuls, and then they’d only get one piece making their buddy out to be crying wolf. Was I a regular juvenile delinquent? Naw, just a typical city kid. Those were the days I don’t mind reminiscing about.

The days I wish to forget follow. People talk about hauntings, even do ghost tours and it’s a good scare around Halloween, but when you experience moments of unexplained phenomena in your life, that’s something else entirely. I’ll save my “entity” story for last.

Weird shit definitely runs in the family. My brother had a few run-ins himself. He swears by a story that there were evil floating heads outside his bedroom window he named the “The Dixies.” He could’ve had a vivid imagination at four years old. Our Dad always said it was just his shadow he saw, but I later had that room and no matter how the sun shone upon the window, you could not see your shadow. Later in life, in the early ’90s when he had gotten married, he took a Polaroid picture of his wife in front of their TV, which was off at the time. I happened to be visiting that day. As the picture developed, there was a message on the TV that said: “Hope…” Not the creepiest thing, but absolutely weird and unexplained.

For me though, everything I experienced happened between 1995-2009. So, I wasn’t a little kid with a vivid imagination, I was an adult between the ages 25-39. I remember once driving down Chew St. in Allentown, past the cemetery. A little girl with a ball darted out in front of my car and I slammed on the brakes. I got out to make sure she was OK and not distressed from the near accident, but she wasn’t there; no one was there. This happened in broad daylight, too. The entire stretch of road near the cemetery was devoid of people. I was taken aback, like I must’ve imagined it, but man, I really thought she ran out. I still get a shiver when I drive past that cemetery.

A few people at my job experienced feeling a presence behind them when there was no one there. One person felt someone or some thing touch their hair, and a few people heard children laughing and bouncing balls. What’s with kids and balls? One guy saw a creepy guy sitting behind him with a big, awful grin, but when he fully turned around, the guy was gone. This was in a location where I always felt like someone was behind me, I just never saw anyone.

In 2003, I was friends with a Tarot card reader named Ronit. I was never big on the reading of the cards, but the artwork on the various decks was cool. For shits and giggles, Ronit read my future in the cards that I laughed off at the time; she said I’d marry a young blonde. At the time, I was into older women, but her prediction did come true (my wife is 12 years younger, but her hair is more brown/blonde). She asked me to return the favor, but as I began and was about to lay down the first card, I noticed a black spectre floating above her head. It really spooked me and I refused to continue. That experience made me never want to touch conduits into the netherworld, like Tarot decks or Ouija boards.

The second weird experience I had with Ronit happened at Columcille Megalith Park in Bangor, Pennsylvania. The stones featured in that park are from the Scottish Hebriden Islands, widely known as being haunted. Walking around the park, we came across a structure that looked like a temple. There was a stone table in the middle of it. She decided to lie down on the table and asked me to take a picture with one hand, holding my car keys aimed at her as if she was a sacrifice. Having seen that spectre I wasn’t keen on this idea, but she insisted, so I did. As soon as we left the structure the wind picked up and the sky got dark. I jokingly said, “See, we managed to piss off someone.” As soon as I said that, a very large, heavy limb fell from a tree and landed in front of us. Coincidence? Perhaps, but I don’t like messing around things like that, and honestly, I haven’t been back to that park since then.

Saving the creepiest story for last: when I was a kid, I always had a fascination with mirrors. I would point my mom’s hand-held into her standalone just so I could see the infinite images. I did this a lot, completely unaware that aiming two mirrors at each other can become a portal for “anything” to come from the netherworld. One day in 1995, while taking a bath, I got mysterious scratches on my legs. My mom was inflicted with the same scratches in the same place. It could’ve been an allergic reaction to the water, but my dad and brother had no reaction. Also, very highly unusual that the scratches we got were in the exact same spot. I didn’t think to seek out a priest, but I did manage to find someone who was heavily into the occult, and they told me to put shaving cream on every mirror and draw various symbols. They also came to the house and burned sage to cleanse everything. Everything we did worked, but when I headed to Philly to go to art school, it happened again and despite my roommate’s concern, I did everything again and it was gone. I will never let two mirrors face each other directly again.

Mischief? Funny as hell. Malevolence? Not at all. 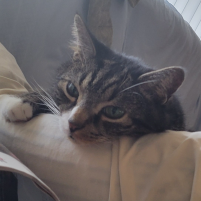 Matt Snyder is a writer, a poet, and artist he knows it. Mr. Snyder has been involved in the Lehigh Valley art scene in multiple capacities for over 30 years. Literally everything from writing/publishing zines & comics, writing-acting-directing film/theater/TV, writing and slamming poetry as well as exhibiting paintings-drawings-photography-3-D Art. Merchandise of his designs can be found at zazzle.com/aems_merchandise as well as keeping a blog of art & poetry at aprolificpotpourri.WordPress.com